Addey is the creator of Typeset In The Future, a website devoted entirely to fonts in science fiction. Why yes, it is a bastion of gloriously esoteric nerdery.

It all began when Addey, a lifelong science fiction fan, started noticing the same font in every movie he watched: Eurostile Bold Extended. Designed in 1960, the font is geometric, functional, and looks good on the side of a spaceship (Star Trek). Or a computer screen (Wall-E). Or the wall of a fictional multinational corporation (RoboCop). “Once I spotted it,” Addey says, “I couldn’t unsee it.”

So he made sure nobody else would, either. That was back in 2014, and since then Addey has turned himself into nerd-dom’s preeminent archaeologist of typefaces. His exhaustive exegeses of the type and symbols in Alien, Moon, and 2001: A Space Odyssey provided entirely new ways to understand those iconic works of science fiction; reading his essays and seeing his screengrabs was like seeing the movies for the first time. In his analysis of 2001, for example, he not only identifies that the spacecraft’s hibernation devices “use Futura for their numeric and medical buttons, and Univers for their Emergency Revival Procedures,” he also transcribes the device’s emergency revival procedures (noting multiple typos therein), and calculates the minimum time necessary to revive someone in an emergency situation. Like we said: exhaustive.

This week, Addey dropped a fourth essay, on arguably the most design-intensive science fiction movie of all time. Deep breath: It’s Blade Runner.

In filmmaking, a production designer uses visual details to sell the story that’s unfolding on screen. That’s especially important when the designer is trying to build a world that doesn’t exist. And typography, it turns out, can be as important as the look of a spaceship or the sound of a ray gun in creating an immersive story. “With fonts you get a lot of context for free,” says Addey. “You’ve established the time frame for your movie in seconds without a lot of special effects or backstory.”

Addey uses easy-to-miss typographic details to guide readers through his synopses, which, more often than not, end up veering into esoteric design trivia.

The new Blade Runner entry points out that the typeface used as the frontage of Los Angeles’ iconic Bradbury building, a “very lovely Berthold Block Heavy,” isn’t, in fact, the font used on the entrance of the actual building.

Addey says the real typeface, with its curving, organic forms, was far more art nouveau, designed so long ago that it was probably a custom font. 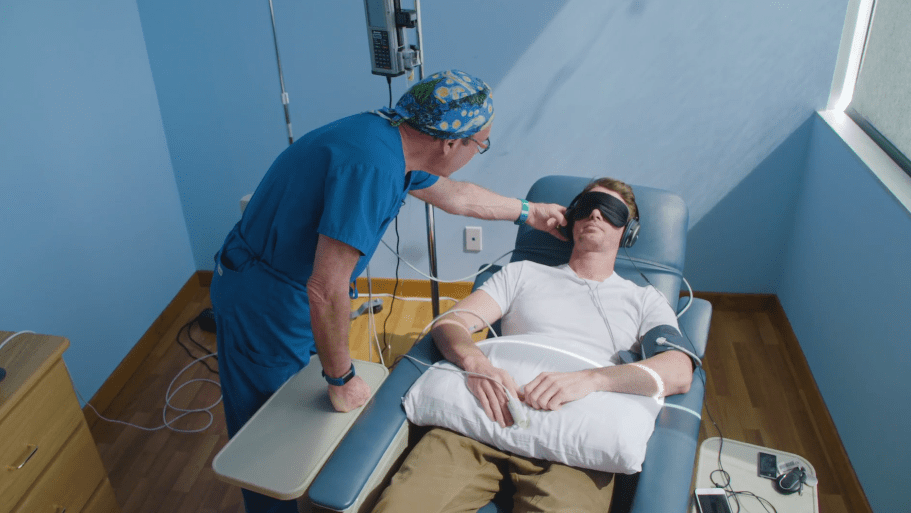 PATIENTS ARE EXPERIMENTING WITH KETAMINE TO TREAT DEPRESSION

PATIENTS ARE EXPERIMENTING WITH KETAMINE TO TREAT DEPRESSION