Snap’s second-generation Spectacles today released as next generation of Spectacles, its wearable camera, with new features for taking photos and water resistance.

The sunglasses, which have the same striking form as the first-generation model, have been slimmed down and now come in three jewel tones: onyx (black), ruby (red), and sapphire (blue).

They’re available to order starting today at Spectacles.com for $150 — $20 more than the previous model.

If you’ve followed the story of Snap’s second-generation Spectacles so far, you know that the first version proved to be a costly misstep for Snap Inc.

Even worse, from the company’s perspective, is that people who bought Spectacles didn’t use them for very long. According to Business Insider, less than half of users continued to use Spectacles a month after buying them.

They were presented as the future of communication, but the first iteration of Spectacles felt more like a toy — a relatively cheap novelty that people used a handful of times before stuffing into a drawer.

Given Snap’s struggles in hardware, it’s fair to ask why the company is trying again. The reason is that hardware has the potential to be a much better business for Snap than software does.

It enables new services, it can be sold at healthy profit margins, and it’s harder for competitors to copy.

First, it created a slimmer design. Spectacles should now fit more easily in a pants pocket, or dangling from the front of your T-shirt. The case is smaller, too, and will take up less space in your bag.

Second, Snap improved the transfer speed between Spectacles and your phone. If you owned the first-generation Spectacles, you likely remember this as the worst part of using them.

Transferring videos off your device means opening Memories, tapping “import,” accepting a dialog box that switches your phone to the Spectacles Wi-Fi network, and then waiting for several minutes while they download.

The good news is the download speeds are now three to four times faster, Snap says.

The bad news is that the rest of the process, down to the awkward connection to a Spectacles Wi-Fi network, remains the same.

In a world where your camera roll uploads automatically to iCloud or Google Photos, Spectacles’ approach still feels annoyingly clumsy.

Snap’s third improvement to Spectacles is that they are now safe to take into the water.

The glasses are water-resistant at shallow depths, and the company says you can safely dive into a pool with them or splash around in the ocean.

The Spectacles case, which also serves as the device’s charger, has also been made splash-proof.

There are a handful of other improvements as well. You can now take photos as well as videos — tap the top button to take a 10-second video, or press and hold for a second to snap a photo.

Both photos and videos are now in high definition, and there’s no standard-definition mode any more. Photo resolution is 1642 x 1642, and video resolution has been improved 25 percent to 1216 x 1216.

Snap added a second microphone to the camera to help make conversations captured through the glasses easier to understand. (In the original version, you could hear the person wearing the glasses but sometimes not the other person in the shot.)

Battery life is about the same, despite the decreased size. Snap says you can shoot about 70 video snaps using Spectacles, and transfer them to your phone, on a single charge.

Snap is also working with a company called Lensabl to offer prescription and polarized lenses when you buy them at Spectacles.com. That feature is only available in the United States for now, though.

Snap will also do more to highlight Spectacles inside the app. If you’re wearing Spectacles, your Bitmoji will appear that way on the Snap Map.

Snap will place ads for Spectacles inside Snapchat, and users will be able to swipe up and buy them. The company also plans to give away Spectacles to its community of influence rs to showcase them to its user base. 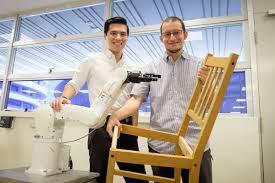 Assembling Ikea furniture should be a new benchmark for robot dexterity

Assembling Ikea furniture should be a new benchmark for robot dexterity