Museum Alive is dioramas but AR, with narration by David Attenborough

Remember dioramas? They were the friggin’ best. I’d jump on any excuse to grab a shoebox, fire up the hot glue gun (okay, Dad handled that), and strategically place plastic tigers and shrubs in their tiny cardboard habitat. I might have learned something, too, but that was beside the point. I was a tiny god with a world of my own creation in my hands.

That’s not unlike the sense of wonder I felt just now watching a miniature prehistoric habitat spring to life on my dining room table. That little bit of magic happened courtesy of Museum Alive, an augmented reality iPhone app available today featuring narration by none other than Sir David Attenborough. It’s an extension of his Natural History Museum Alive film and includes three interactive AR exhibits.

Each exhibit features an extinct animal in a recreation of its particular habitat. The app directs you to find a flat surface and pinch to zoom the image to the right scale.

Once that’s done, the habitat comes to life and a 3D animation begins with Attenborough’s narration. You can move your phone around for a different view as you watch a saber-toothed Smilodon track and maul its unsuspecting prey.

My only disappointment with the app is that there are only three of these AR exhibits. There’s promise of an upcoming fourth addition of a dodo, but it’s not really clear if the app, which costs $2.99, will get updates beyond that.

I can see kids really liking the experience but probably losing interest soon after they’ve explored the three current exhibits. Maybe that’s the right time to bust out the shoeboxes and hot glue gun. 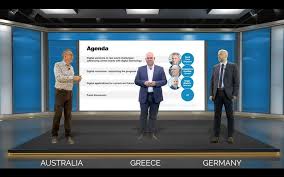 Will holograms be the next innovation in the post-pandemic workplace?

Will holograms be the next innovation in the post-pandemic workplace?