Bahrain: Pearl of the Gulf

PEARL OF THE GULF

A small archipelago in the heart of the Gulf, Bahrain comes from the Arabic term al-bahrayn meaning ‘two seas’. It was the central location of the ancient Dilmun civilization, and throughout time has been called ‘Life of Eternity’, ‘Pearl of the Gulf’, and ‘Paradise’ representing the rich heritage, culture and beauty of the 33 natural islands and several man-made ones that make up the Kingdom of Bahrain.

Home to vast springs, areas of natural beauty, wildlife, and friendly locals who welcome visitors with open arms, Bahrain has garnered a reputation worldwide as one of the best places to visit in the Gulf.

The country also has a number of sites on the UNESCO World Heritage List including the Pearling Path and Qal’lat al-Bahrain, demonstrating its deep seated history and culture.

The country’s international fame as a pearling nation dates back to the days of Alexander the Great, when the Greeks used the name Tylos to refer to Bahrain as the centre of pearl trading.

Bahrain is also known for its graceful palm trees

The existence of palm trees has inspired the culture and image of Bahrain for centuries, which can be seen in the architecture, local crafts, and decorations around the island. The dates produced by palm trees have been harvested by families for generations and are a traditional delicacy.

Inspired by the country’s heritage, Best of Bahrain has utilized the symbol of the palm tree and encompasses its values at the core of the company 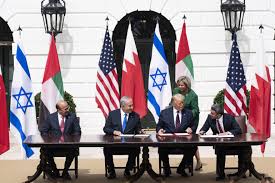 Our Vision and the Abraham Accords Declaration

Our Vision and the Abraham Accords Declaration